Secure your communications with Doculock, powered by Blockchain 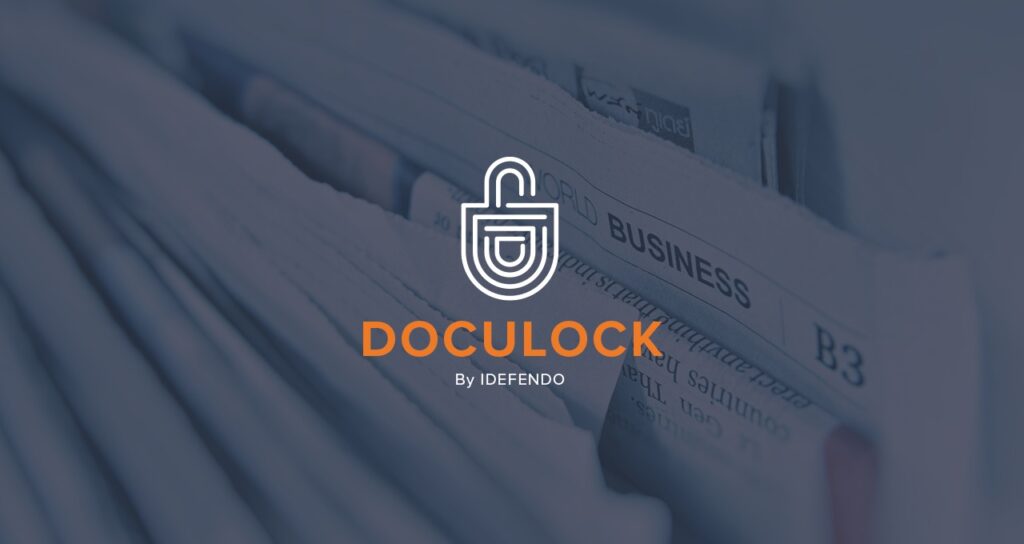 PRESS RELEASE
Fight misinformation and fake news. With Doculock by Idefendo, you can prove, with certainty, whether a press release or image is identical with the version you issued.

(Stockholm, Sweden) With corporate communications published in your own website’s media section you can be relatively certain that what is published there is true to the original (unless your site is hacked or a sneaky employee makes edits of course). But what about media releases in PDF format you sent out, and even more easily editable Word and Power Point documents?

Anyone with a computer and desktop publishing tools can edit documents, such as a press release, certificate or diploma, and cause harm to your business. Adding fuel to the fire is the emergence of deepfakes: highly convincing but fraudulent audio, photo, and video content, created by AI, with the potential to cost businesses even more. With Doculock you can prove, with certainty, whether a document or file someone has in their hands, or should we say, on their screens, is identical with what you released, or not.

Blockchain technology was first outlined in the early nineties by Haber & Stornetta, two mathematicians who wanted to implement a system where document time stamps could not be tampered with. Working at Bellcore Labs, the scientists were allowed to pick their own research projects. For them, a problem worth solving was the authentication of digital documents: how could you be sure the version you were looking at had not been altered from its original?

Fast forward to 2022. Companies have more digital documents floating around than ever, locally on hard drives, as well as on shared cloud servers. According to DeepTrust Alliance, a global network to tackle deepfakes and disinformation, companies are spending billions of dollars repairing corporate reputation and financial misinformation due to disinformation.

But up until now, there has been no definitive way to prove that the version of the document you are looking at is in fact the final, approved version your team decided to send out.

Doculock solves this problem. By giving each document a digital stamp, powered by blockchain, that cannot be deleted, edited, misconfigured, corrupted or compromised in any way, you can prove with certainty that your version of the document is the correct one.

—The reputational, monetary and legal damage fake news and misinformation creates for businesses is getting out of control. But it can be solved with blockchain and this is something our customers have been requesting for a long time. We are pleased to now being able to offer this service to our clients, says Peter Jidesten, CEO of Idefendo, the tech company that is offering the service Doculock.

Doculock can also be used to build trust and transparency for your company. If you only publish your corporate communications to your website, what stops someone internally from editing the document, even after the news was released? Nothing really. By using Doculock you can show media and other interested parties that the version they look at at your website is indeed the version you released and keep a tamper proof log of any edits made to the page afterwards.
Doculock is available as a SaaS solution. You can also connect your internal systems to Idefendos Digital Witness(tm) engine through our API to have the logging done automatically in the background.

Idefendo, the company behind Doculock, is a tech company providing blockchain-based solutions that benefit a wide range of industries. Idefendo, founded in Sweden in 2015, is a global legal professional technology partner to Thomson Reuters, the world’s leading provider of financial information. Some of the world’s largest law firms use Idefendo’s blockchain-based tools for automatically audit logs of their information management systems.

This website uses cookies to improve your experience while you navigate through the website. Out of these, the cookies that are categorized as necessary are stored on your browser as they are essential for the working of basic functionalities of the website. We also use third-party cookies that help us analyze and understand how you use this website. These cookies will be stored in your browser only with your consent. You also have the option to opt-out of these cookies. But opting out of some of these cookies may affect your browsing experience.
Necessary Always Enabled
Necessary cookies are absolutely essential for the website to function properly. These cookies ensure basic functionalities and security features of the website, anonymously.
Functional
Functional cookies help to perform certain functionalities like sharing the content of the website on social media platforms, collect feedbacks, and other third-party features.
Performance
Performance cookies are used to understand and analyze the key performance indexes of the website which helps in delivering a better user experience for the visitors.
Analytics
Analytical cookies are used to understand how visitors interact with the website. These cookies help provide information on metrics the number of visitors, bounce rate, traffic source, etc.
Advertisement
Advertisement cookies are used to provide visitors with relevant ads and marketing campaigns. These cookies track visitors across websites and collect information to provide customized ads.
Others
Other uncategorized cookies are those that are being analyzed and have not been classified into a category as yet.
SAVE & ACCEPT